Another Day at the Beach

October 10, 2009
The weather started out mostly sunny yesterday, but we did have a rain shower later in the evening. The waves became rougher during the day, but not enough that we had to stay out of the water.

This is what was left of the sand castle we built the day before. The high tide got some of it, but we just built another one.

I thought this clam shell was interesting. I didn't do much beach combing yesterday - only picked up 2 shells. I was too busy watching the waves keeping an eye out for rip currents while the kids swam. With that sand bar building up, the waves were going all different directions which had me a bit worried. No rip currents, though :D

This is the sunset we saw from our deck last night. This was about an hour before the rain started.

BarbCarol said…
Linked to your site from someone else's. Love your journal of Dauphin Island. I don't like the ocean, but your photos make me long for such a vacation. I have even looked it up on the internet.
Thanks for sharing your experience.
October 10, 2009 at 7:47 PM

I don't know the title of this quilt, but it is a Log Cabin Variation that I just completed for a customer. I love the soft blues and browns in this quilt.

It just begged for feathers.

See what I mean?

I did add a few leaves in the small border, though.
Read more

I removed my old zippers yesterday and completed attaching my new zippers. Along the way I made 2 additional sets of zipper leaders so I have the ability to have 3 quilts ready to zip on if I need to.

As promised, I took photos of the steps and will post them in stages. These directions are my own and you may be able to find other instructions out the internet. This is something I came up with on trial and error.

The first set of zipper leaders I made were with garment zipper that you buy by the yard at a fabric store. They didn't work out the way I wanted. They kept separating on their own. So now I have 8 yards of zipper to use in other projects.

First off you'll need some materials and supplies.

1. Canvas Duck - I purchased 4 yards of 60" wide canvas so I wouldn't have to seam the leaders. This is enough to make 5 sets of 2 leaders. Buy the length to match the length of your zippers.

2. Separating Zippers in the size of your choice - I purchased 144" long zippers f…
Read more 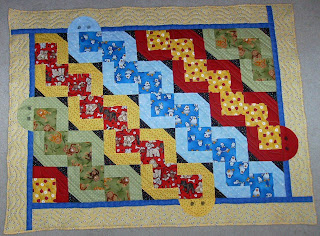 I got the name of the quilt wrong in the previous post. It's "Wiggles and Giggles" and is found in a "Country Woman" magazine from earlier this year. I think it turned out really cute.


The faces on the worms are drawn on with fabric markers. The instructions said to applique the faces on, but I cut 2 pieces of each and sewed them right-sides together, turned them rightside out and stitched them into the seam.