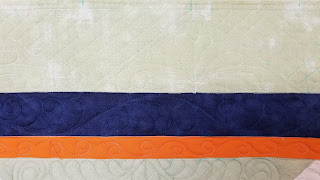 I had an unexpected day off from my day job on Thursday so, I decided to spend it quilting. The Cat's Cradle quilt is still on my longarm machine and I really needed some extra hours to spend quilting it.

I spent about 30 minutes cleaning out a bookcase of old quilting magazines that I hadn't looked at in over a year. Then on to the Cat's Cradle quilt. The outer border was still not completed, so I focused on that. I had to redraw the design on the lower portion of the border because I had missed my target points in a large section of the design and the cross-hatching would have been way off if I didn't fix it. That took over an hour to redrawn the design.

Then it was break time. A cup of coffee, lunch, and time spent with my daughter and our dog made the 90 minute break go by fast. Another 2 hours of quilting and the border was done. This is one border design that I won't do for some time. It is soooo time consuming! It's beautiful, but time consuming.

The fact is this entire quilt has been time consuming. Consider that I had to take off the borders and add new borders to get the quilt to lay flat. Then design the quilting, trace the design on to the top with a light box and water soluble marker took a considerable amount of time. Then that outer border took 2 hours per side to quilt. That is investing in a quilt! Luckily, this is my own quilt and not a customer quilt. I don't think I would have accurately predicted the amount of time this would have taken to quilt this top and would have lost large amounts of money on this if it were a customer quilt.

The quilt still isn't done and it has been on the machine since the beginning of January. Almost 6 weeks. I have been fighting extremely cold weather that makes my studio too cold to work in, too, so that adds to the time frame.

I have only the alternate blocks to quilt now, so hopefully I can finish this weekend and move on to a simpler project.