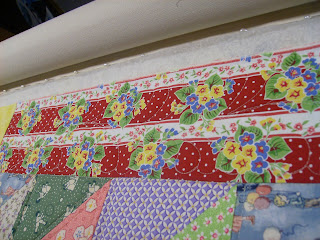 I started back to quilting today :D I have Lorraine's 30's Repo quilt on the machine and am about halfway done. I'm quilting feathers in the borders and outline quilting the half-square triangles in the body of the quilt. My plan is to finish it tomorrow. This morning I had an appointment with a new doctor. I put off looking for a doctor in Jefferson City until this month. It's kind of sad when the doctors are younger than you are :( She's really nice though and very knowledgeable. I have to have some blood work done on Friday and an ultrasound of my thyroid gland on Wednesday. My thyroid nodules seem to be enlarged so she wants to get an idea of their size and compare them to previous records. I have to dig up phone numbers of the hospital where I had a previous ultrasound done so they can transfer records.

I had a kind of rough weekend. Even though the fever was gone, I had no energy and I had a pretty bad headache yesterday. Today my blood pressure was very low, so that may have been the problem. I'm feeling better this afternoon at least.

After my doctors appointment, I took Mot out to spend her birthday money. She wanted to buy more trains and cars to go with her Thomas the Tank Engine train set. We found a set of 3 train cars with 4 pieces of track and another engine - this one is Dennis. We also found a bridge track addition to add to her set. So she has lots of extra track, 2 engines and 3 railroad cars. The bridge set also came with a set of 3 trees, a wather tank, a train office, a signal light and a cable pole. She really likes playing with this train. She has all the cars connected to Thomas and runs him with Dennis at the same time. Since Dennis isn't pulling any cars, he can go faster and eventually runs into the back of Thomas. She thinks it's hilarious! She's having a blast!