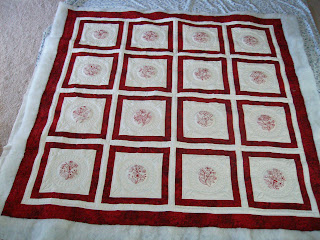 This is a charity quilt that I quilted for the Kimberling Area Library in Kimberling City, MO. They will raffle the quilt to raise funds for the library. This is an all volunteer library and they raise all their own money. A couple of local quilt clubs help raise funds by donating quilt tops. I've quilted several for them over the years as have other quilters.
The Library is having a Quilt Day in March where they will sell raffle tickets on the quilt as well as sell other items. They will also have a program and a show and tell. It's really a small quilt conference held in just a few hours and tons of fun! 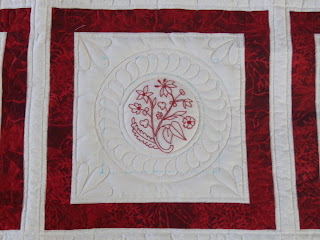 The blocks are machine embroidered redwork on unbleached muslin. I quilted a feather in the outer red border, straight-line stitching in the cream colored sashing, and le loops in the red framework. There is a feather around the embroidery with a leaf-type design in the corners.
The lady who embroidered the blocks marked the center circle with a water-soluble pen and left the marks in to be removed later. I used them as a guideline for quilting the circles and feather. I marked the corners with an air-soluble pen for a guide to quilt in the leaves. 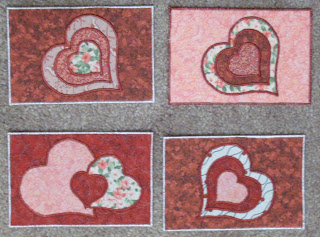 I had some Peltex left over from the landscape postcards, and since Valentines Day is coming up, I decided to make some fabric Valentines. Here are 4 out of the 7 that I have left! It was too cold to quilt today in my basement studio, so I used that as an excuse to make more fabric postcards
Both of my girls chose their favorite as soon as I completed them. Another one was sent in a package of goodies that I mailed to a soldier in Iraq. These 4 will go to my kids 3 grandparents and an adopted grandfather. I'll have to make some more for the kids in my Girls in Action class before Valentines Day. I still have some Peltex leftover - enough for at least half a dozen postcards.

Millie said…
The fundraiser quilt is lovely and your quilting makes the quilt spectacular.
February 4, 2009 at 7:09 AM

Janet Hartje said…
Your charity quilt is amazing! Love the quilting, do you have a longarm machine? Your Valentine's are adorable too. Janet
February 6, 2009 at 7:49 AM

Kathy said…
I love how you quilted those embroidery blocks. I have some to be quilted and just wasn't sure how to quilt them. Great Job!
February 9, 2009 at 2:50 PM

Susan Loftin said…
Thank you Kathy. The customer wanted me to quilt a circle around the embroidery and I love feathers, so I combined the two.
Susan
February 9, 2009 at 7:21 PM