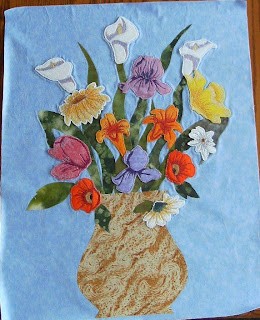 I spent the afternoon building my bouquet. I decided against the batik for the vase as the colors in it were competing too much against the colors of the flowers. I fused on the background leaves, then the vase and then added the flowers one by one until I liked the composition. They were secured with a glue stick. I heat set the glue with my iron on both sides of the fabric so they will stay in place while I satin stitch around them.
The entire piece is stabilized with "Totally Stable". So far there is only one layer of Totally Stable, and I'm going to test it with one flower and see how it holds up. If I get too much puckering, I'll add another layer.
After I have the satin stitching done, I'll add some background filler flowers - something to look like Baby's Breath is what I'm thinking right now. Stems also need to be added so that the flowers no longer look like they are floating in mid air.
Then the Totally Stable will be removed and I'll add some borders. Then it's ready for quilting and binding. My goal was to have it done by Saturday, but there is still a lot of work to do on it, so we'll have to see how it goes.
Susan

Anastácio Soberbo said…
Congratulations for the blog.
Sorry not write more, but my English is bad.
A hug from Portugal
August 7, 2008 at 5:06 PM

Susan said…
I love what you chose for the vase. The flowers are so nicely placed. Great arrangement!
August 8, 2008 at 5:30 PM