August 18, 2009
Devil's Tower, Wyoming! The photo I posted yesterday was from several miles away. This photo is still a few miles away. All of these photos were taken in 1994. 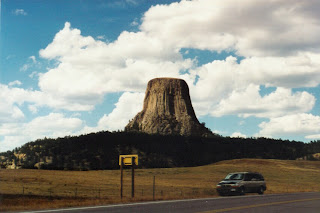 This is a close-up shot. The "Tower" is so large that I couldn't get all of it in the frame. This photo really distorts the shape of the Tower. 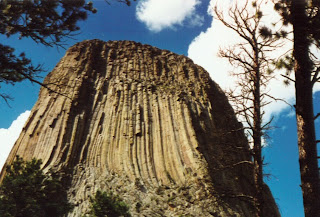 Here we are farther back at the entrance to the part. You can guess that we were in Wyoming during the Sturgis Motorcycle Rally. It wasn't planned that way - we aren't bikers, but it just happened that we planned our trip during the Rally. 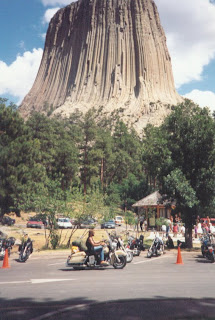 Here we are in the parking lot with our mode of transportation - a minivan! 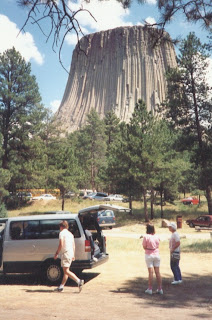 So Tracy, you were very close on your guess! Devil's Tower is thought to be the core of an extinct volcano. However, Sioux legend has it's own story about 7 little girls who climbed onto a low rock to escape attacking bears. The rock rose into the sky and the bears clawed at the rock trying to get to the little girls and left the ridges of rock in the Tower. The rock grew so high that the girls reached the sky where they were transformed into the constellation Pleiades.
While we were visiting, there were several rock climbers on the face of the Tower. It's not a sport that I would want to try, but I imagine the views from the top are spectacular! That I would like to see.

Janet Hartje said…
I have some photos almost exactly like yours. Terrific spot to visit. We saw several climbers too.
August 18, 2009 at 10:00 AM

TracyC said…
That is so interesting--I'd never heard about this before. It almost looked like something from Hawaii photoshopped into the picture. :-D Now Ada and I will have something fun to look up tomorrow.
August 19, 2009 at 10:39 PM